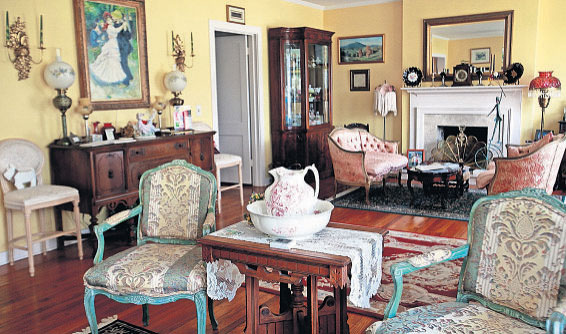 LAKE WORTH BEACH — Parrot Cove extends from Lucerne Avenue to 13th Avenue North. Its eastern boundaries include the east side of Federal Highway to the Lake Worth Golf Course, including North O Street, North

“We love owning a business here,” said John Rinaldi, owner of Sabal Palm House the inside of which is shown above. “We’re close to the Intracostal, the beach and we’re a few blocks from downtown.” Lakeside Drive, North Golfview Road and North Palmway.

The majority of structures within the neighborhood are residential. According to recent census data, the population is approximately 1,318.

According to its website, the Parrot Cove neighborhood association was formed in 2000 as a nonprofit organization with the goal of providing information about a wide range of issues, serving as a way to meet one’s neighbors, and to build a strong sense of community.

What business owners and residents say

Anthony Marotta has been a resident of Parrot Cove for six years and is currently the president of the neighborhood association.

“The neighborhood is walkable and, in just a few minutes, residents can be enjoying a drink or dinner on the patio overlooking the Intracoastal at The Beach Club restaurant, get to our beach, or enjoy the Snook Islands nature area, ” he said.

The Parrot Cove neighborhood association board of directors works closely with the city to ensure a safe environment for residents. The neighborhood is considered a low crime area, but residents are encouraged to report suspicious activity, remain vigilant, and take basic safety precautions, according to Marotta.

Marotta sees himself as a long-term resident of the neighborhood, and cites Parrot Cove’s uniqueness as a high point.

“In my case, it comes with the unique challenge of maintaining a 107-yearold house,” he remarked.

Parrot Cove offers a unique collection of architectural styles, with some homes dating back more than 100 years. Many distinct homes in Parrot Cove were written about and photographed in the book “The Cottages of Lake Worth” by local residents Janice Snearer, Taylor Jones and the late Dean Sherwin.

The neighborhood association of Parrot Cove offers a biennial tour of its historic homes. The next tour is scheduled for Jan. 26.

“We host several social events during the year, the neighborhood association is very involved in the community,” Marotta said.

The neighborhood also recently petitioned the city to rename North “O” Street to North Ocean Breeze in order to match its southern counterpart.

Located near the Snook Islands nature reserve, Sabal Palm House Bed and Breakfast is owned and run by John Rinaldi.

“We love owning a business here,” Rinaldi said. “We’re close to the Intracostal, the beach and we’re a few blocks from downtown.”

Rinaldi notes that the crime rate has declined over the years, which as a good sign for residents and local business owners.

“We find our neighborhood to be much safer than our friends’ neighborhoods, some of whom live in West Palm or North Palm Beach,” he said.

Like Marotta, Rinaldi is also a fan of Parrot Cove’s architecture.

“We don’t have a bunch of cookie-cutter houses where a developer goes in and everything looks the same,” he remarked.

Rinaldi noted said residents were friendly from the moment they moved in and some knew the name of their dog before they knew his family’s names.

“You live in the city, but you have this small-town feel, which is nice,” he said.

Rinaldi resided in Orange County, N.Y., before moving to Parrot Cove in 2003. And after nearly two decades, he is looking to relocate.

“We have our inn for sale, so we’ll probably be moving out of the area once we sell,” he said. “We’ve been doing it for 16 years, so we’re getting tired.”

Rinaldi adds that they are hoping to hand the inn off to someone that wants to take it to the next level.

Some amenities that are nearby include the Lake Worth Beach Golf Club, Snook Island Natural Area and boat-launch facilities across from Bryant Park.

Read the article on palmbeachpost.com